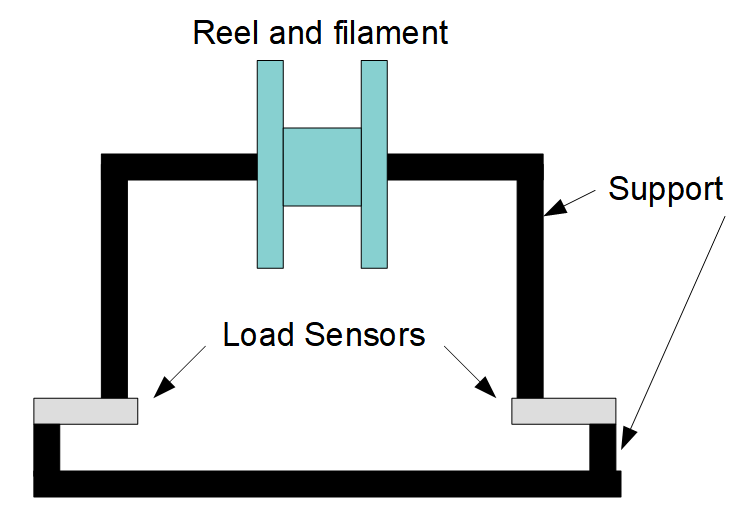 An idea’s been forming in the back of my head for a while: that it should be possible to estimate the amount of 3D filament left on a reel by simply weighing the reel with its filament, and subtracting the reel weight. Sounds simple, no?

Today I realized that it may be possible to modify a printer to give a live estimate of filament left on the currently-mounted reel, by “live weighing” the reel, and knowing the reel weight and filament density.

In principle, calculating the remaining weight or length of the filament on the reel is trivial, as illustrated in the figure below:

It’s also trivial to convert from weight to length by knowing the density (grams per meter) of the current filament and the nominal diameter of that filament.

Further, Verbatim’s product page for that filament specifies a density of 1.24 g/m^3; another manufacturer with a similar density estimates 110 meters for a 1 Kg reel of 3mm (2.85 mm) filament. That works out to 0.11 meters/g.

How To Do It

In practice, the tricky part is how to know a few elements of the first equation above:

Working from the bottom of that list to the top:

Now that I think about it, I think the filament profiles used by Cura already allow Cura to estimate filament mass (grams) from length of filament and filament diameter. So it’s likely nothing new has to be done to know the filament density.

Item 3, the total weight, is a bit tricky to measure “live” for the reel mounted on the printer, and will likely take experimentation to come up with a workable design. In theory, you can start by attaching two load sensors to the two mounts of a reel:

The load sensors in the figure above would be similar to  Sparkfun’s 10Kg range, straight bar load cells, which retail for about $7 per. Sparkfun also sells the XH711 Load Cell Amplifier for about $10 per, retail. I put these numbers in just to give you a very rough idea of the cost; a printer manufacturer could probably buy similar parts in quantity for significantly less money. Incidentally, I used this load cell and amplifier in my hobby project, Dog Water Bowl Scale.

In practice that calculation depends on how accurately each load sensor measures the weight. One thing I discovered in my hobby work on a Dog Weight Scale is that most load sensors are designed to measure a weight that’s temporarily placed on them; if you leave a weight on the scale for hours or days, the scale “creeps”. That is, the measured weight changes, because the load cell’s metal bends a little over time.

So I think one tricky part is calibrating the load sensors for a reel that may sit on them for days.

For extra credit: someone with a decent physics background could probably figure out how to mount two load sensors on a single-arm-style printer such as the Lulzbot Taz 6.

So, depending on your application, if this system can measure the weight of the mounted reel (and filament) to about 1% or 2%, it could tell you the length of your remaining filament +/- about 1  or 2 meters.

For example, if the print head is not pulling hard on the filament, that effect might be possible to ignore. If on the other hand, the head is parked far away from the reel, the head might be tugging on the filament, and that force might need to be subtracted from the measured weight.

So I’m guessing you may have to experiment to find how the print head affects the measured total weight of the filament and reel.

Let’s recap: to make this happen someone needs to:

….or you could just do it yourself:

…or you can do the informal version of this, without the fancy printer modifications: