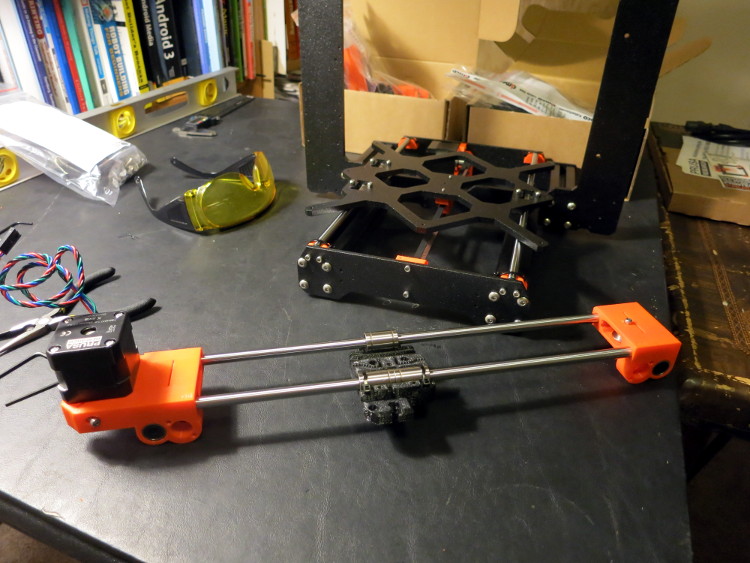 Having just spent 24 hours, spread over 4 days, assembling a Prusa I3 MK3 Kit, here are my notes to help you assemble your own kit.

Allow Plenty of Time: Although I spent 24 hours assembling the kit, others have successfully spent far less time. I’d allow a full weekend, with some spillover into the week, to assemble your kit. Much of the assembly involves very tedious work, so be sure to take breaks. The extruder assembly, in particular, took far more time (hours) and much more patience than I expected.

Prepare: I watched Tom Sanladerer’s excellent pair of videos (part 1 and part 2) recorded from his over-8-hour live stream unboxing and assembly of the kit. Although it was a big investment of time, it let me know whether I was up to the challenge of assembling the kit, and showed some of the tricky parts of the assembly (and there are tricky parts).

Use the Online Manual: As I started reading the (detailed) paper assembly manual, I realized it was out of date: I was missing the flathead screwdriver it showed. I was lucky: finding that difference made me go to the online manual, which is up to date, but more importantly contains helpful comments from other customers and Prusa support people. Without those comments, I probably would have given up, or at least broken some parts, several times during the assembly process.

Read Users’ Comments Before Performing Each Step: The users’ comments in the online manual point out mistakes that are easy to make, and can break your kit or cause calibration errors later. I wish I’d read those comments before I over-tightened an idler pulley housing.

Be methodical: This kit is less like an Ikea table kit and more like a detailed wooden model of the USS Constitution with all its rigging. It’s a project that requires a lot of patience, double-checking that you’re using the right parts and in the right place, and a good bit of ingenuity when things don’t go according to plan.

Use Extra Tools: Although you can assemble the kit using only the tools it comes with, I found a couple extra tools a big time- and frustration-saver:

There are a few ‘tips and tricks’ that are useful in almost every step, because printed plastic parts aren’t as accurate as the injection-moulded parts you’re used to.

Print spare parts before you need them: The beauty of a 3D printed 3D printer is that you can print your own replacement parts. I recommend that as soon as your printer is assembled and calibrated to your satisfaction, start printing PETG replacement parts. Either that, or cultivate a friendship with someone else who has a Prusa I3 MK3 – which is a good idea anyway!